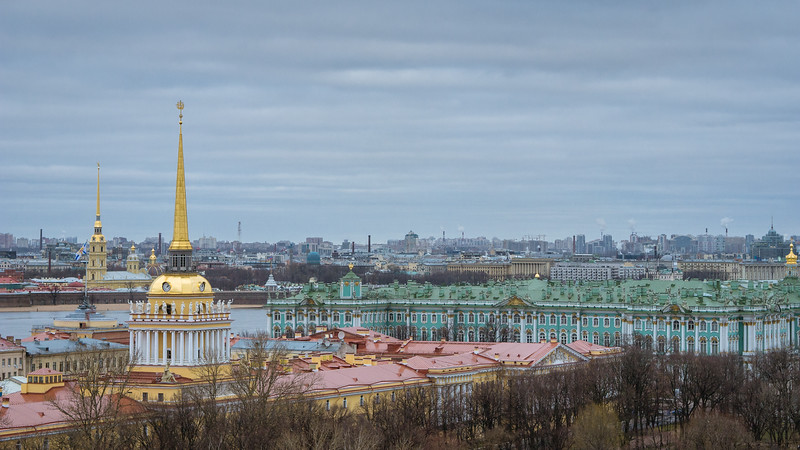 Cold air gnawed through my layers, persistent and unrelenting. As an avowed lover of all things tropical—smoothie flavors, color pallets, and, yes, temperatures—I had dreaded exploring St. Petersburg, Russia in November, a month marked by gray skies, drizzling rain, and pervasive chill. Although my unsuitability for cold weather panned out, St. Petersburg upended my every other assumption about what I would find when I touched down in “The Venice of the North”—a name both apt and yet too simplistic to encapsulate the the city’s je ne sais quoi.

Sweeping views of the city from Saint Isaac’s Cathedral—the Winter Palace (ie. the Hermitage) is the massive blue building.

Visiting Russia: My Why

Hype and media frenzy formed my preconceptions about Russia. Although I have never yet found a country’s politics an accurate representation of its people, I struggled to shake the politicized rhetoric about Russia as I packed for my trip—an endeavor that involved shoving every sweater I owned into my bag. I approached my business trip with cautious curiosity, knowing the dangers of visiting with a “single story“—a uniform stereotype applied broadly to a people and place based on limited information.

Funny enough, hype in media was the very nature of my talk at the VII St. Petersburg International Cultural Forum. The TASS News Agency invited me to speak at the Forum on seven-person panel entitled: “Hype Together: The Era of Cultural Shock.” But how could I discuss fake news, bias, and media ethics in Russia? I grappled with the question even as my plane touched down in St. Petersburg. 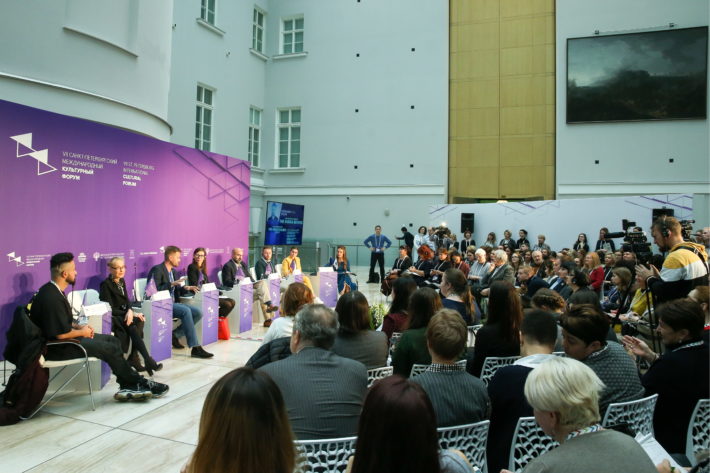 My first day passed in a haze. I formed only fleeting impressions of the city, too consumed with the swirling details of my panel talk. And even though my first discussion took place in the storied the General Staff Building of the Hermitage Museum, I spared it but a glance. Instead I shook many hands and then discussed ethics in not just media, but blogging/influencer relationships specifically.

And I found the conference both fascinating and exceedingly normal.

No whiff of politics entered my talks; instead we explored ideas about communicating culture despite modern obstacles (think 10-second attention spans and pay-for-play social media). We discussed the value of raising our collective expectations of what content creators offer the world—this is a big one for me: Why are we content with a culture of superficial, wistful Instagram shots replacing thoughtful discussion in the travel industry? Why are we allowing bloggers to sneak past our media filters with barely disclosed sponsored relationships? I think a lot about what it will take for us to shift this rising trend.

In short, my section of the forum examined the role of mass media in the promotion of culture and art—how are the media and bloggers fairing and where can they do better?

My efforts in the tourism industry these past years have gradually shifted from one of simply broadcasting travel adventures, to instead purposefully sharing ideas and travel stories that raise level of conversation about a place.

We as travelers, me included, can always find ways to more responsibly interact with a new place—find the cultural adventures without leaving behind a negative legacy. This type of dialogue, however, is not always sexy and shareable—it doesn’t bring in the big bucks from advertisers and these types of pieces rarely go viral. Given that, is it any wonder many of the discussions eventually spoke of the delicate balance content creators need to remain relevant in a culture valuing cat videos and pop culture memes? It’s a balance I haven’t yet found on this site, to be honest, but nevertheless, I persist. Because despite the challenges, navigating these issues is what readers deserve—content that entertains but doesn’t assume a baseline unwillingness to tackle weightier subjects. 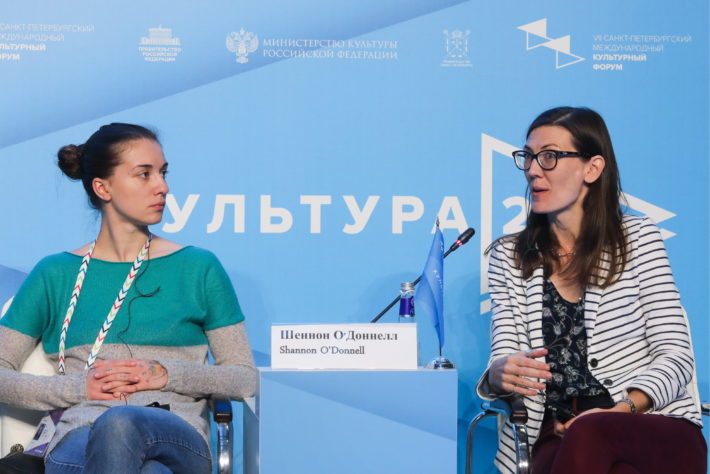 Speaking on a panel about Women in Cinema. (Image courtesy of TASS News Agency)

Once the hustle had passed, I approached the city as I do any new destination: discover iconic “must-see” landmarks, immerse in offbeat experiences, and ask questions of any local open to answering them. Our posse of speakers explored together the first few days, but as they slowly flew home, I sunk into purposeful anonymity amongst the crowds.

As an advocate for slow travel, I knew three days was not enough to do all the things, so I  extended my dates beyond the conference. Those few extra days proved long enough for me to piece together an unexpected story of a culture well-versed in hospitality, even if it appears unlike the gushing verisimilitude of American hospitality.

When they found out it was my first time in their country, locals immediately asked me how reality differed from my expectations. I could only confess that it was all entirely more lovely, in every way, than I had anticipated. 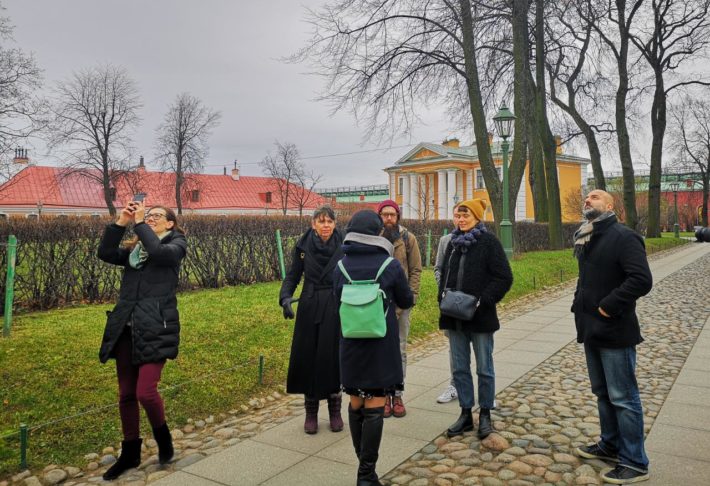 My fingers were numb from the cold, but I was determined to frame the perfect shot. :)

Views of Saint Isaac’s Cathedral on a chilly winter day. 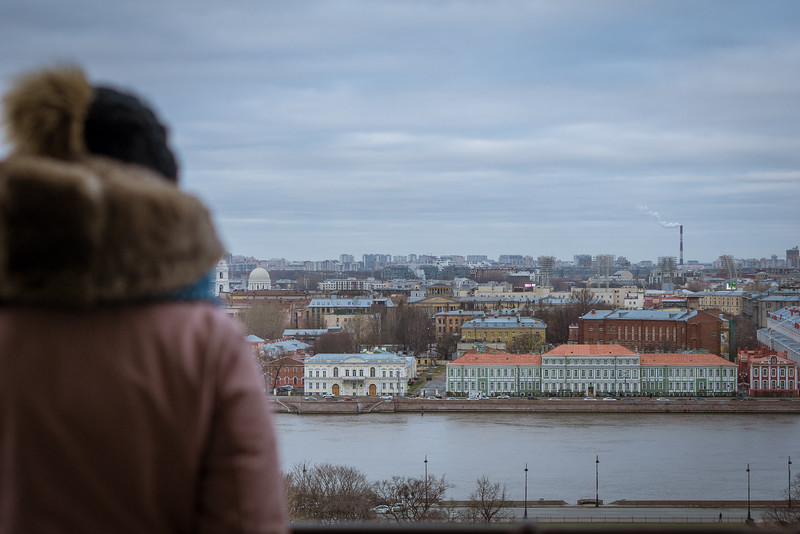 Views from Saint Isaac’s Cathedral over the river and the pretty buildings of St. Petersburg.

Street scenes near the iconic Church of the Savior on Spilled Blood.

The city of St. Petersburg is stunning. Steeped in history and bustling with arts and culture, a broad cross-section people from all over the country fill the streets. Like metropolises all over the world, St. Petersburg offers a dynamic blend of traditional and new—hipster vegan street food served under the shadow of the iconic Church of the Savior on Spilled Blood. Grandmothers in bundled layers fill the streets in equal measure alongside smartly-clad businessmen. My casual search for vegetarian borscht crossed three winding canals, each bridge endowed with intricate lattice ironwork and sweeping views of pastel-painted buildings from the 18th and 19th centuries.

As a rule, I eschew big cities—their frenetic pace and towering buildings overwhelm me. I favor a slow pace of life and cities that match my speed. My six month sojourn in a 1,000-person beach town on Mexico’s Pacific coast was, in a word, idyllic.

However, somewhere between tipping back a celebratory shot of vodka with fellow speakers and breathing deep of breathtaking views from St. Isaac’s Cathedral, St. Petersburg charmed me, wholly and completely. And I never saw it coming. 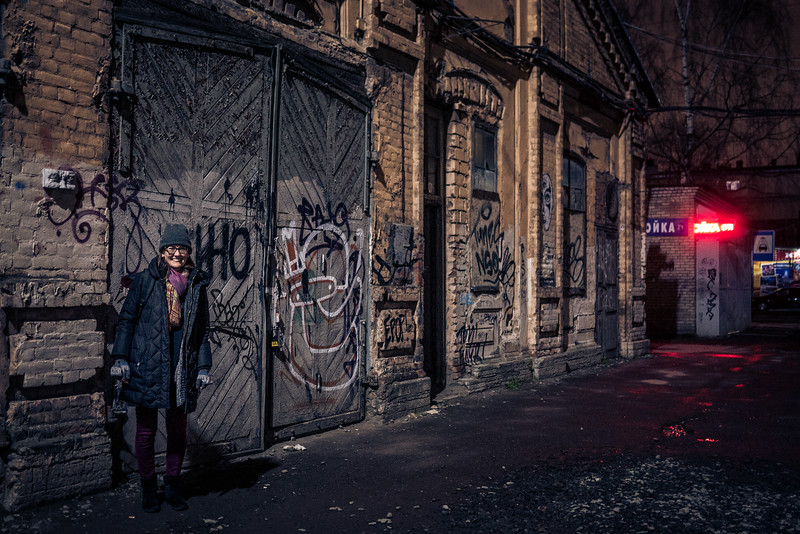 It looks like a sketchy alley, but it offered—bar none—the most interesting vegan street food I’ve had anywhere in the world.

Travel is a near constant assault on the senses. Every encounter rewrites the codes and social mores by which you live. Things you inherently understand—how to order food, sip tea, or greet people—instead present moments of apologetic fumbling met by gracious smiles of instantaneous forgiveness. These unexpected misadventures form the bedrock of my best memories.

Yet countries and experiences have blurred over the past decade as the reality of living on the road eclipsed the novelty of new places and cultures. Along the way, I lost a piece of the travel experience—the piece that had lured me into a life of perpetual travel in the first place. When I settled in Barcelona earlier this year, I hoped the mundane joys of routine would reignite contrasting surprise when I ventured to new places.

Views of downtown from St. Petersburg’s Peter and Paul Fortress.

By all accounts, it worked. Traveling to Russia fundamentally upended my cultural assumptions about the country and the people. While I had hoped to visit the country “one day,” I had allowed an onslaught of negative media to overshadow a truth I have found in every corner of the world: People in every pocket of our planet share more fundamental similarities than differences. Russians, like Americans, work to build a better life for their children, converse with friends over steaming cups of tea, and possess nuanced perspectives misrepresented by fleeting news clips.

My favorite college professor once said the mantra of public relations is this: Perception is reality, facts notwithstanding. Our reality forms from a maelstrom of information influenced by media, socioeconomic status, friend groups, and so many other contributing factors. Perhaps what captivated me most about St. Petersburg, Russia was how much it defied my perception—one I had built without firsthand experiences.

People are not their government’s politics. This is an assumptive kindness many afford me as an American, and this trip reminded me to afford others that same grace.

Because I am charmed by Russia.

Although I will return to explore other areas of the country, part of me hopes to never return to St. Petersburg, thus forever preserving these crystalline memories. The people, place, and experience coalesced into a welling sense of wonder that struck without warning. This never happens in the places I expect to love. Instead, I ended a casual taxi ride in Yangon, Myanmar feeling an existential connection to the hum of universe. After two weeks in Tbilisi, Georgia merely awaiting my flight home, the city’s charm and hospitality left me an unabashed fangirl. And a whirlwind business trip to St. Petersburg reignited the inexplicable lure of finding myself completely adrift in the unknown.

A Little Insight… What Goes Into a Sustainable Tourism Industry?

Around the time that I was struggling to hold down my breakfast, hiking at a clipped pace across the wild Kyrgyz countryside and up a mountain, I realized a few things needed to change. Having just..

Finding a way to stop traveling has been an evolving process. When I booked that one-way flight ten years ago, a year of travel loomed before me, an epic round-the-world trip that would fulfill my ..

On view tomorrow, June 8—"Giacometti” fills the ramps of our rotunda, featuring nearly 200 sculptures, paintings, and drawings by the preeminent artist Alberto Giacometti, whose intensive focus on the human condition continues to provoke and inspire new generations. A collaboration with the Fondatio

There would not be a better gift for your loved ones than the new Infinix #Hot6Pro. It packs great specs and exotic looks to captivate everyone! #DoubleAmazing #InfinixPakistan

What. A. Player. Many happy returns, Kevin Keegan

Dwyane Wade knows Monday's game against the Los Angeles Lakers will be..